In this series, you will learn about crucial details of the most important (and complicated) TCP protocol. For your reference, below is a list of the articles in this series:

TCP is a transport layer protocol with 3 main properties: reliability, flow control and congestion control (which are also used to differentiate itself from UDP). TCP is reliable because the protocol ensures that all data is fully transmitted and can be assembled by the receiver in the correct order. Reliability is provided through TCP connection, checksum and retransmission.

In this article, we will discuss TCP connection establishment.

In a nutshell, a TCP connection is defined by a pair of endpoints or sockets where each endpoint is identified by an (IP address, port number) pair, so if you terminate a connection and restart with the same endpoints, you have established 2 instantiations of the same connection.

From kernel level, Socket is created on each device with socket() call and binding the socket to an address with bind() call. The passive opener uses listen() call to wait for connection. The active opener initiates connection with connect(), the passive opener then accepts the connection with accept() call. Networking socket is an open file, so kernel will give a file descriptor to the process.

In preparation of connection, both TCP devices also prepare a data structure called transmission control block (TCB) which holds the information of connection, i.e. IP addresses and port numbers, pointers to buffer where the incoming and outgoing data are held, the variables that keep track of the number of bytes received and acknowledged, bytes received and not yet acknowledged, current window size, etc. Each device maintains TCB on its own.

Finally, you can look at finite state machine model of TCP transition to have a better understanding.

From the networking point, TCP connection is established with the well-known 3-way handshake.

If the SYN packet is not acknowledged, the client retries, with the frequency doubles every time, i.e. It sends at 1s, 3s, 7s, 15s, 31s, 63s marks (the frequency starts at 2s and then doubles each time). By default the total time is 130 seconds, until the kernel gives up with the ETIMEDOUT errno. The variable tcp_syn_retries defines number of retries of SYN packet.

The variable tcp_synack_retries in proc filesystem defines number of retries of ACK+SYN packet. 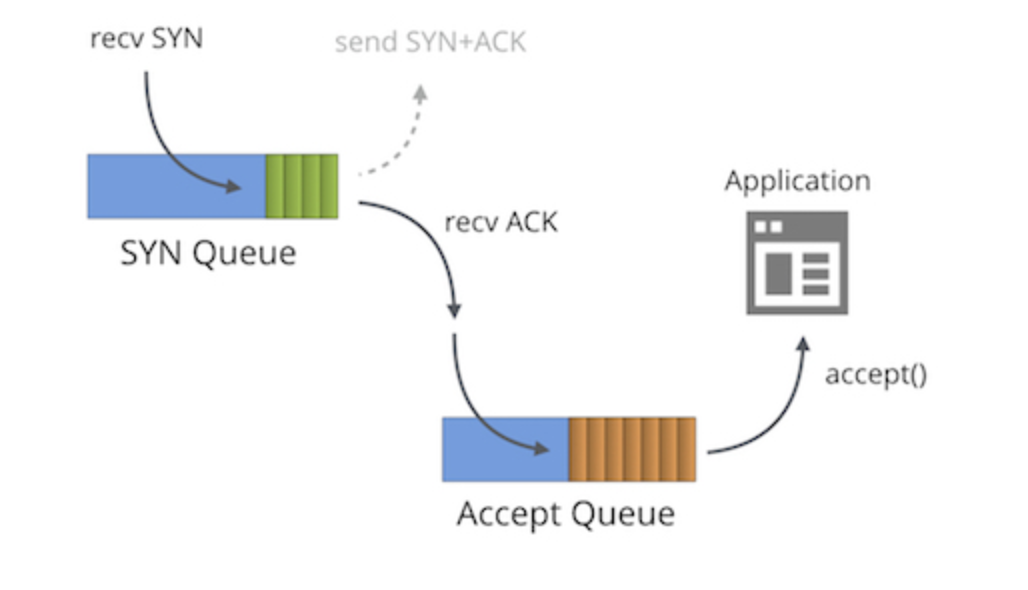 If the accept queue is full, there are 2 solutions:

In the past, the client and server do not send data until 3-way handshake completes. However, the new TCP Fast Open (TFO) proposal allows payload to transfer during connection establishment to eliminate the round trip and lower the latency.

Once the connection is established, the hosts can start transferring data. In the next post, we will discuss about connection termination.