Any operating system is built upon 4 foundational subsystems: process management, memory management, filesystem and I/O management. Process management is probably the most visible to the users. In this article, We will understand the basic concepts in process management, such as system call, files descriptors, etc. by walking through what happens when typing a command into a Unix/Linux prompt from the keyboard.

Let’s first try to understand the keyboard. The operating system inputs and outputs data via hardware components called devices. Devices are generally categorized as block or stream devices (although some devices such as clock or touch screen do not belong to either). Keyboard is an example of stream device.

Devices communicate with computer via an electronic system called controller or adapter (The controller can be a chip on the motherboard or a printed circuit card that can be inserted into a PCIe slot) The controllers have connector that connects directly to the device via a physical cable.

The Device Controller receives the data from a connected device and stores in set of registers or local buffers storage which are a temporary storage areas, in which items are placed while waiting to be transferred from an input device or to an output device in which OS can read and write via device driver.

The controller’s job is to convert the serial bit stream to block bytes and perform any error correction necessary. Each device controller is in charge of a specific type of device, i.e. disk drives, audio devices, or video displays). The OS requests and receives data from devices via either Memory-mapped I/O (CPU-to-device) or Direct Memory Access (memory-to-device) 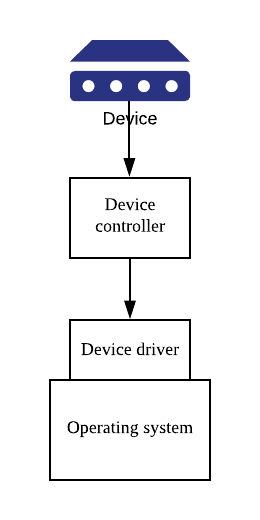 Normal keyboards have fewer than 128 keys, so only 7 bits are needed to represent the key number. The eighth bit is set to 0 on a key press and to 1 on a key release. When a key is struck, the respective key number (scan code) is put in an I/O register of the microprocessor. When a command is typed from the keyboard, there are 2 interrupts generated: one when the key is struck and another when the key is released. At each interrupt, the keyboard driver extracts the information about what happens from the I/O port associated with the keyboard.

A device driver is the standard interface through which the device controller communicates with the OS through Interrupts. The drivers can handle the preprocessing of the data and just delivers the corrected lines to the user programs, i.e. the cooked mode - the characters stored until an entire line has been accumulated, because the user may subsequently decide to erase part of it

The other mode is raw mode where the data is passed without interpreting any of the special characters, but the cooked mode remains default mode for most Unix systems.

After the driver delivers the input to the program, the program sends characters to the current window to display. Usually, block of characters, for example, a line is written in one system call.

Upon entering the command from terminal, the user input is read by library function getline(), getline() reads from standard input file stream - STDIN and stores input into buffer as string. The buffer is broken into tokens and stored in an array by getopt(), i.e.

The shell built-in glob() function checks for expansion if the command has any wildcard characters by matching pattern for global list of patterns, i.e. * which will expand the shell to a list of files and directory. This process is called shell globbing. The shell also checks alias that stored in user specific initialization files such as .bashrc and .profile and checks if the command is built-in command, i.e. implemented and executed in shell interpreter itself, it is also faster to access these type of command as it is always available in RAM.

If command is not built-in, the shell uses getenv(“PATH”) function to get $PATH string from the environment. It is first parsed using the ‘=’ as a delimiter then it uses strtok(PATH,”:”) function to further parse out the paths using “:” as a delimiter into array. The shell append “/” to end of all the directories in the PATH environment variable, i.e. path[x] + ‘/’ + argv[0] into a buffer, and use access() function to accessibility of a file at that path location.

The shell will now make fork()/clone() system call to create a copy of itself. When fork() is called, the calling process traps to the kernel and creates PCB (process control block)(task_struct and thread_info in Linux) and kernel stack

Process contents are filled from parents’ descriptor values except PID (process ID) . Linux looks for available PID and updates PID hash-table to point to new task structure, it also sets the fields in task_struct to point to previous/next process on the task list (by using the linked list, process structs need not to occupy contiguous memory space)

Operating system actually does not copy the parent’s segment to child’s memory segments; but OS gives the child its own page table and have them point to parents’ pages (only read) and use copy-on-write technique to copy memory. Whenever either process (the child or the parent) tries to write on a page, it gets a protection fault, the kernel allocates a new copy of the page to the faulting process and marks it read/write, so only pages that are actually written have to be copied.

After the fork(), the child starts executing one of “exec family” (execl, execle, execv, execve, execvp) which internally uses execve() to run user’s command. execve() replaces the current content of the process with the program that executed by user.

The first value on the stack is the argument count followed by an array of the addresses of the different arguments, then address 0 marking the end of the argument array. Right after that there is a second array of addresses which each point to a zero-terminated string which would be the environment variables, this array is also terminated by having address 0 at the end.

If you want the terminal to run the program instead of forking a child process, you can use the exec command directly. However, upon termination, your terminal process will exit and may cause you to log out of the system.

Depending on the program, process will make necessary system calls. You can use strace command to see which system calls are called.

Open files are normal files, directories, stream or a network file, etc. that are read or modified by processes. File descriptor is the handle that process uses to access the file. When a file is opened, the OS will create an entry to represent the info about this file and file descriptor is an integer that represent these entries.

lsof will provide a list of all open files by reading from /proc filesystem:

When a file is opened, the file descriptor will start from 3 because 0,1,2 are reserved for standard streams, i.e. standard input (stdin), standard output (stdout) and standard error (stderr). These streams are used as input and output channels that handle data between devices and the applications.

There is also mmap() syscall which is used to allocate memory

The data actually is not copied directly from process to/from hard drive, instead the write() syscall copies files from process to buffer outside the memory, and then the OS copies from the buffer to the actual store devices using fsyc(), hence the process does not know when the data is written. Similarly, the read() call will first checks and then copies data from from buffer to process memory if data is already in the buffer, otherwise the data is blocked while data is read into buffer and then unblocked to read the data from buffer. The process has to be blocked instead of return empty data to avoid the process falsely indicated end of file.

A process can be terminated in 4 ways:

When a process exit, all open streams with unwritten buffered data is flushed and closed. Open files will be closed with close(). OS must release its page table, its pages, and the disk space that the pages occupy when they are on disk. An exit status is returned to the OS, the kernel sends SIGCHILD to parent process

We have repeatedly mentioned system call, interrupt, signal, etc. We will explain these jargons in this post.