Synchronizing time in distributed systems is crucial to ensure that the interactions between members in the system are correct and fair. For instance, let’s say a server A in a reservation system receives a request to purchase a flight ticket with seat S, server A locally logs the transaction at time T. Server A also informs server B that seat S has been taken. Server B also logs the information with its local timestamp that less than T. When another server C queries both A’s and B’s logs, it could be confused that a client purchased a ticket at A after the seat has taken and could further take incorrect actions.

Clock in a single system

Before we dive into a distributed system, let’s discuss the clock in a single system. Any computer has a device called clock or timer to keep track of time. A clock consists of 2 registers, i.e. a counter and a holding register, and a quartz crystal oscillator that can generate an accurate periodic signal, typically in the range of several hundred MHz to a few GHz and can be amplified to a range of several Ghz using electronics.

The clock operates in 2 modes:

To prevent the current time from being lost when the computer’s power is turned off, most computers also have a battery-backed CMOS RAM such that date and time can be saved and read at startup. If no information is present, the system will ask the user to enter the date and time which will be converted into the number of clock ticks since a known starting date, i.e. 12 A.M. UTC on Jan. 1, 1970, in Unix. At every clock tick, the interrupt-service procedure updates the clock by 1.

The standard worldwide time is called Universal Coordinated Time (UCT). Computers around the world can synchronize their clocks with Internet UTC servers for up to milliseconds precision or with satellite signals for up to sub-microsecond precision.

In a distributed system, each system’s CPU has its own clock which runs at a different rate. The relative difference in clock value is called clock skew.

On the other hand, the relative difference in clock frequency is called clock drift and the difference per unit time from a perfect reference point is clock drift rate, this rate is affected by many factors such as temperature.

Once we know the clock is drifting away from the reference clock, we can change the clock value. However, it is not a good idea to change the clock backward, because going backward can violate the ordering of events within the same process, for example, an object file computed after the time change will have the time earlier than the source which was modified before the clock changed. It is better to adjust the clock gradually by changing the rate of interrupt requests.

We denote C(i) as the value of timer I at UTC time t.

Some clock synchronization algorithms try to achieve precision or internal synchronization - to keep the deviation of clock value of any 2 machines in a distributed system within bound D at all time, i.e. Berkeley algorithm

Some algorithms try to achieve accuracy or external synchronization - to keep each clock value within a bound R from value S of an external clock, say UTC server or an atomic clock at all time, i.e. Cristian’s algorithm, NTP, etc.

Of course, the ideal situation is when C(i)=S or D=R=0, but this is not possible because clocks are subject to clock skew and drift.

Hardware clock usually defines its’ Maximum Drift Rate (MDR) relative to the reference UTC time. Imagine that fast and slow clocks that deviate from the UTC in opposite direction with the same MDR, at any unit time, they will deviate by 2*MDR from each other. If we want to guarantee a precision D, say clocks cannot differ more than D seconds, we need to synchronize the clocks at least every D/(2*MDR) time units since time = distance/speed.

Christian’s algorithm modifies step 3 above Host A measures the round-trip-time RTT of message exchange. The actual time at A when it receives response is between [t , t + RTT ]. Host A sets its time to halfway through this interval:

In order to calculate the error, we incorporate the minimum latency l1 from A to S and l2 from S to A. l1 and l2 depend on operating system overhead, i.e. buffer messages, TCP time to queue messages, etc.

So now, the time at A when it receives response is within [t + l2, t + RTT - l1]. Host A sets its time to halfway through this interval:

Error is at most (RTT - l2 - l1)/2, the longer your RTT is, the more error. Christian’s algorithm did not specify a way to increase or decrease the speed of the clock but allow us to change the speed of clock. If error is too high, RTT can be taken multiple times and average them.

Network Time Protocol (NTP) servers organized in a hierarchical tree-like system. Each level of this hierarchy is termed a stratum and is assigned a number starting with zero for the reference clock at the top, i.e. the lower the stratum, the server is supposed, but not always, to be more accurate. 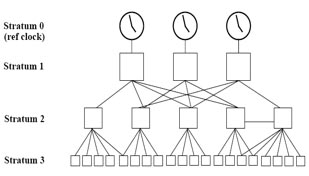 In NTP, a client will estimate the message delay when it tries to synchronize with the server using the following algorithm:

The client knows the values of t1, t2, t3, t4 and hence can calculate its’ offset theta relative to server, and round-trip delay delta:

The client calculates (θ,𝛿) a number of times, and use the minimum round-trip delay as the best estimation for the delay between two hosts, the associated offset is the most reliable estimation of the offset. Let’s discuss how reliable this estimation is.

we denote the real offset as real_offset, say the client is ahead of server by real_offset, and suppose one-way latency of first and second messages are l1 and l2, then:

The offset error is bounded by the non-zero RTT. We cannot get rid of error as long as message latencies are non-zero.