Many distributed systems require a leader to coordinate members. For instance, usually a group of replicas will have 1 leader that receives reads from the client and then sends copy to others. The crashing of the leader can lead to data inconsistency. Next, what if the members cannot agree on the next leader, or even worse more than 1 server claims to be the leader. To keep the system consistent, we need to:

Let’s consider a model of system of N processes, each has their unique ID since without any special characteristics, there is no way to select among them, and every process knows the ID of every other process. Leader election algorithms aim to:

The simplest algorithm is that the currently running highest ID process will suppress lower ID processes and become the leader, hence the name the bully algorithm. Since every process knows the ID of others:

Let’s look at an example, node 2 detects the leader has failed and sends the “ELECTION” messages to every higher-id nodes. 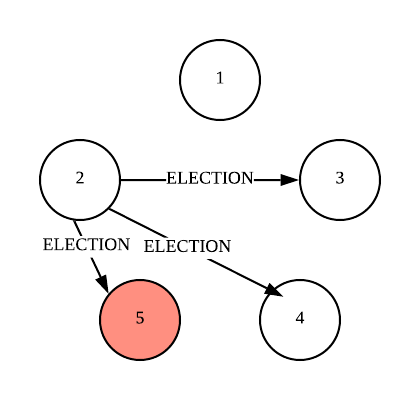 The non-faulty nodes 3 and 4 sends back OK messages to node 2, node 2 stops any action. 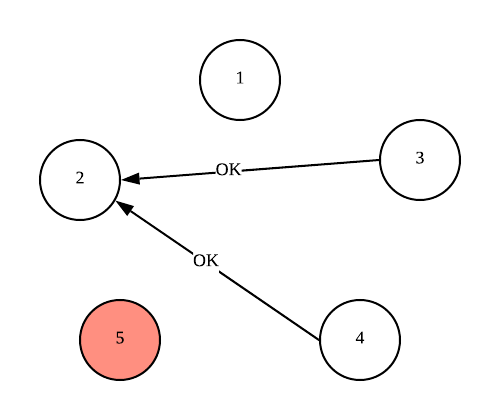 Now both nodes 3 and 4 sends ELECTION messages to nodes with higher ID than themselves, and receives respective OK messages from non-faulty higher ID nodes. 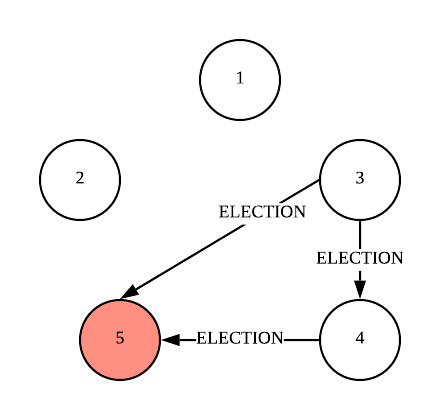 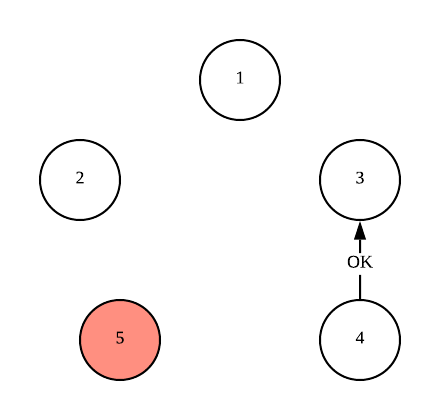 Now Node 4 does not receive OK message, and so it sends COORDINATOR message to all lower-ID processes to announce itself as new leader. 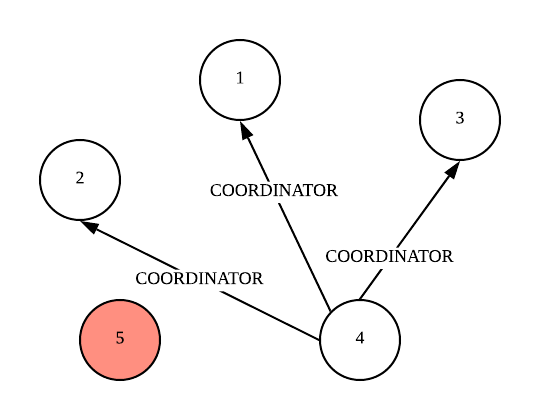 The worst case happens when the election starts from the lowest-ID process, i.e. it sends (N-1) ELECTION messages to all the higher-ID processes. So the ith process sends (i-1) election messages, and the total messages are (N-1 + N-2 + … + 1) = O(N^2). On the other hand, the best situation is when the second-highest ID process detects leader failure and it only needs to send (N-2) COORDINATOR messages, no ELECTION message since there is no non-faulty higher-ID process than itself.

The Safety property cannot be met in some situations:

The Liveness condition can be met under the assumption of reliable message delivery, that is messages are eventually received at the correct destinations.

In the ring algorithm, The system of N processes are organized in a logical ring, each process has a communication channel to the next process in the ring and messages are sent clockwise around the ring:

Another variation of ring algorithm is the initiator creates an empty list, add its own ID and then send around the ring, each non-faulty process subsequently appends its own ID to the list. When the list arrives back to the initiator, it knows the non-faulty highest-ID process, and send a another message around the ring to inform everyone about this who the new leader is.

The worst case situation occurs when the initiator is the ring successor of the would-be leader. There are total of (3N-1) messages:

The best case is when the initiator is the would-be leader, there are 2N messages:

For example, in the diagram below, when node 6 fails, the best case situation is when node 5 initiates the election, and the worst case occurs when node 1 initiates. 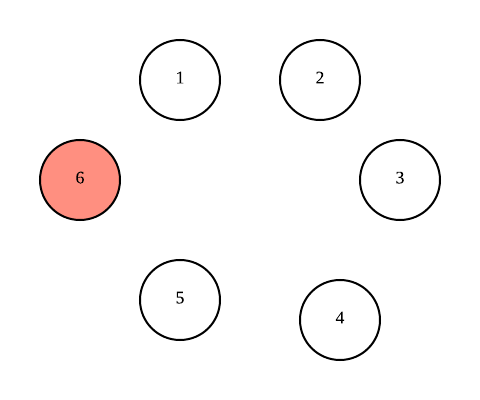 It is clear that Safety is achieve since everyone knows about highest ID process as leader, since all IDs are compared and a process must receive its own ID back before sending an ELECTED message. The process with larger ID will not pass on the lower one, therefore it is impossible that both should receive their own ID back.

If there are no failures, we achieve Liveness since election eventually terminates. However, the Liveness is violated if the would-be leader failed after sending its ID, causing the ID to go round the ring forever, there are some proposals to fix this:

A bit of Consensus

In practice, we can apply Consensus protocols for election, i.e. each process proposes a value, everyone in group reaches consensus on some process P’s value, and this process P is the new leader. The most popular Consensus protocols are Paxos and Zap, they guarantee safety but only eventual liveness, i.e. not always guarantee that protocol will ever terminate. Several systems use Paxos or Zap for election, i.e. Google’s Chubby system, Apache Zookeeper, etc.