Therefore, we can avoid the difficulty of synchronizing the time by instead assigning logical timestamps to events.

Lamport’s logical clock (or timestamp) was proposed by Leslie Lamport in the 1970s and widely used in almost all distributed systems since then, almost all cloud computing systems use some form of logical ordering of events.

Lamport define the relation happens-before (->) between any pair of events with 3 rules:

The goal of Lamport’s logical clock is to assign timestamps to all events such that these timestamps obey causality - if an event B is caused by an earlier event A, then everyone must see A before seeing B. Formally, if an event A causally happens before another event B, then timestamp(A) < timestamp(B). The timestamp must always go forward and not backward.

Let’s look at an example where 3 processes in the system with the following conditions: 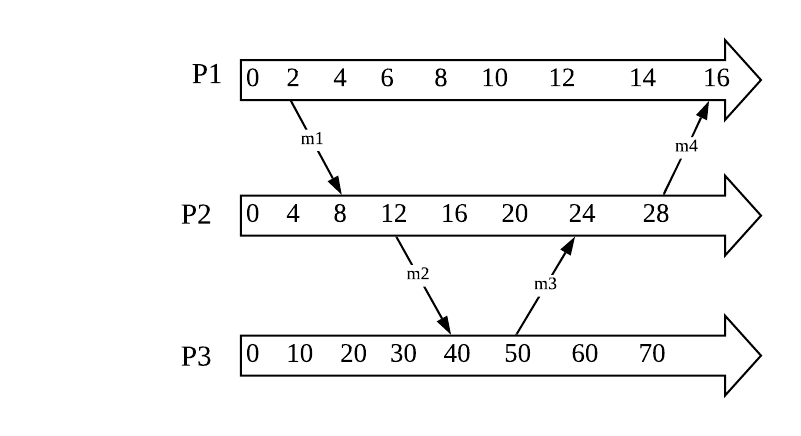 The messages m1 and m2 obey happens-before, however messages m3 and m4 do not and we need to correct the local clock. For example, m3 is sent at 50, them m3 should only be received at 51 or later. The algorithm to update Lamport’s counter is: 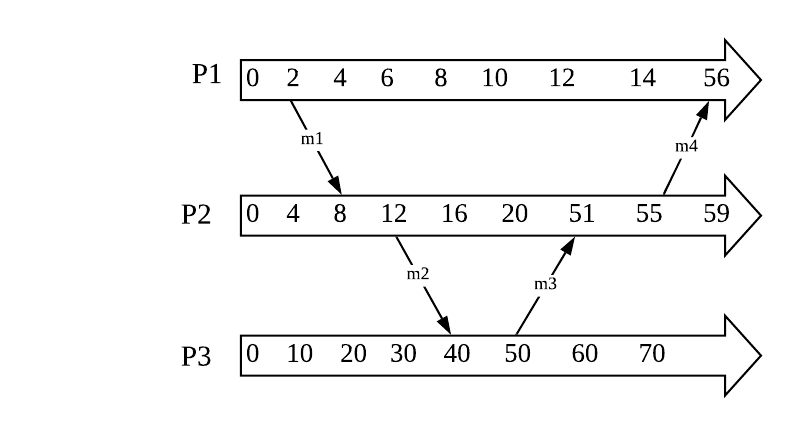 On the other hand, if events happen from different processes and do not exchange message directly or indirectly, then nothing can be said about their relation, and these events are said to be concurrent. Concurrent events are not casually related and their order is not guaranteed.

Hence, Lamport’s logical timestamps obey the rule of causality but cannot distinguish between casual and concurrent:

The vector clock tries to overcome the shortcoming of the logical clock. Suppose there are N presses in the system, each process uses a vector of integer clocks where each vector has N elements, We denote the vector maintained by process i as Vi [1…N], the jth element of the vector at process i, Vi[j], is i’s acknowledgment of latest events at process j.

Vector Clock algorithm to assign and adjust vector timestamp in each process:

Using vector clock, we define some relationships of 2 events a and b:

Vector clock is is used in key-value stores like Riak.